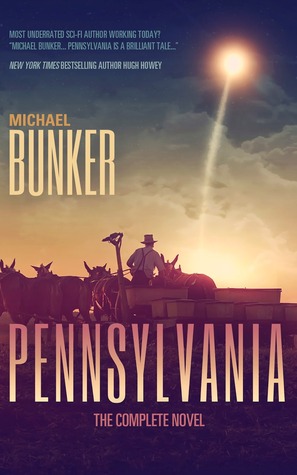 Have you ever wondered what it would be like to start again? To some, this may be paradise–leaving mistakes beneath dust clouds of the past, but to others this may be a sad thought. Everything you once knew has changed: family, friends, way of life. Enter the mind of Jedidiah Troyer, emigrating to the planet of New Pennsylvania where he will work shovel and trowel to build an Amish paradise for his and his own. The question is, how much does one Amish man lose by entering a world of electronics, the internet, and spaceships, and is such loss of “plain” comforts worth the price of starting over?

Michael Bunker has a unique way of blending the slow paced Amish world with the magic of new worlds on a thrill ride of culture clash. He speckles nods to “plain” living like stars set to contrast the black night of space itself. Way up there, science fiction thrives, yet never does Bunker forget his roots–seemingly oxymoronical, yet relevant. Cultural blending through compare and contrast has been something that I have come to love about Bunker’s writing style, and Pennsylvania does not fail my expectations of such brilliance. He sets the pace, builds the world, and defines the characters like Adam in Eden: placed just so.

Not only does Bunker have a handle on setting up his universe of Pennsylvania, but such is used as a launching pad for the thrills that follow. The reader is neither thrown blindly into the action, nor are they held back from the ride too long. As the pages turn, what seems at first to be a simple trip to some other world turns out to be much more than meets the eye.

Bunker has collected 5 episodes into this single Omnibus edition. Each episode ends with cliff-hanger excellence, but this does more than keep the reader invested in the series. Many episodes end with a nod to the next, revealing minute mysterious clues that keep the reader’s mind turning while they are hanging onto the edge of their seat for the next page’s revelation.

Unlike W1ck (see my review of W1ck), Pennsylvania has a satisfactory ending. The conclusion still comes rather quickly, but not overly so because of Bunker’s unique writing style. The wrap-up is much more conclusive while leaving room for some expansion into further forays of Amish/sci-fi delight. In short, it satisfies.

There is some amount of tell instead of show when it comes to describing the culture of this new world that Jed has entered. Instead of fully fleshing out the cultural discrepancies, Bunker glosses over them making the world and Jedediah’s integration with it less believable, and equally loses reader satisfaction points.

Much like W1ck (though different in it’s own ways), the whole Omnibus collection feels like a prologue. Bunker clearly has a plan for future books within this universe, but Pennsylvania has a distinct “book zero” feel instead of a “book one.” There is a lot culture/tech explanation as well as character introductions, but very little plot. Bunker has a handle on crafting worlds with nonchalant flavour, but his plots are the furthest thing from complex or surprising.

Conclusion: All in all, if you are anything like me, you will fall in love with Bunker’s ability to shape worlds and craft cultures. These pros are what keep me coming back to books by this author, but the lack of plot complexity and endings that leave things hanging, as if Bunker simply ran out of words, leave me a little dissatisfied. This, however, by no means dissuades me from reading more excellent Amish Science Fiction, but it does not put Bunker on my oh-my-goodness-I-can’t-wait-til-the-next-book-comes-out list.