A Shadow in the Flames 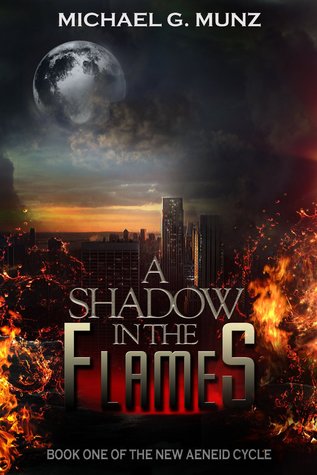 What would you do if in a single moment, the whole world you knew went up in flames? No, I am not talking about the proverbial flames of societal/relational loss, but actual flames. You know, the orange-tipped red tongues that lick at the night sky, dwarfing the stars with their wonder, fire exploding in arson’s wake, and there is only one obvious answer: find the bastard that destroyed your life. Enter the world of “A Shadow in the Flames,” a futuristic thriller with moon exploration, vampires, explosions, airships, and cybernetics. Sounds too good to be true? Well… it is.

This is a real struggle for me. Normally I try to find what the author does well before getting into the bad, but I find myself scratching my head a lot while trying to come up with something to say under this heading. Why rate it 2 stars instead of 1? Short answer: I managed to finish the book. Long answer: there is a bit of humour in the dialogue… Okay, so that answer wasn’t much longer. Looking at the book with a broad perspective, it is not that the book fails to hit every mark, and indeed it tries for many of them, but it is just rather bland.

The biggest issue that “A Shadow in the Flames” had was consistency. Have you ever eaten a piece of meat that is full of tiny bones and you have to chew carefully, then inevitably stop eating to pull them from your mouth? Reading this book felt a bit like that. The POV jumped all over the place adding much confusion to things. Not only than, there is a completely separate POV/plot line where almost nothing happens and it remains 90% unrelated until the very end. A poorly written Epilogue tries to tie the two together, but mostly it just prolongs the ending. I wish that the moon exploration plot pieces were completely taken out of the book. I understand, based on the ending, that such plot lines will be the focus of the sequel, but if so, all of that plot should have been kept under wraps until that book was ready to be released.

Not only does the plot jump around, and the POV changes cause confusion, but one character has three different names throughout the book. This can work, if certain people call them by one name, and others call them by something else, but the names seem to be virtually interchangeable. There is some kind of mystery woven in about the character’s “true” identity being a secret to some people, but then everyone ends up using that “true” name at one point or another, so that left me confused. It especially becomes strange when that character is the POV focus for a scene. They call themselves by all three names throughout the scene, which made me wonder if the character was actually multiple people at times, but then I remembered that they just had three names for no reason.

Also, there are far too many elements involved. No, not in the plot, but in the general world that the story takes place. This wouldn’t necessarily have been a problem if the book was longer and the author spent more time addressing each cultural/world nuance, rounding things out. Instead, they are poorly explained, or just thrown in because someone thought it was cool. The book reads mostly as a police procedural without the procedure, even though it is marketed as a science fiction novel. Yes, it has flying machines, people with enhanced vision or hearing, and vampires (for some random reason), but they add nothing to the story and often get in the way of the plot.

The writing style feels a bit juvenile. There is an over-use of passive voice throughout (he, thought, he imagined, he wondered, he believed, he was scared, it was black, the job was simple, etc). Every POV change is littered with long drawn-out paragraphs filled with passivity in an effort to explain how someone is feeling, differentiating them from the other characters, but instead of rounding things out, it just make the writing quite bland.

Unfortunately, because this is exclusively how the author chose to develop the characters, once these paragraphs are over, all of the characters sound and act pretty much the same. There are slight nuances at particular points (one character being overly humorous) but for the most part, if the dialogue tags were taken out, the reader would not know who was talking when… and it wouldn’t really effect the progression anyway. This makes the characters feel flat.

I wish there was more good things to say about this book, but too much poor writing gets in the way of the potential and it was hard for me to identify. “A Shadow in the Flames” is a light thriller with specks of uninteresting mystery and pockets of humour. It suffers from POV issues, pacing problems, and lack of characterization as well as a poorly stitched together plot. It will not leave a sour taste in your mouth, just not much taste to begin with. I suppose its ability to remain bland is at least consistent.

Smashwords
NOTE: This book is available at other retails, but is not DRM-free