Thread in the Tangle by Sabrina Flynn

A fantasy tale about fiery nymphs and flaming lust 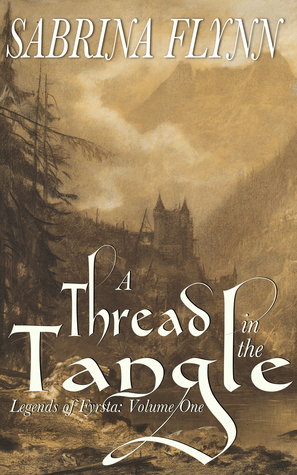 Fire. It is in us all. Sometimes it comes out, forged with passion or shaped by rage. Ears turn red, face ruby from infused flames licking beneath flesh. Fire can be strong or weak, fighting from beneath rain’s blanketing assault, or combusting the world with spontaneity like a desert: dry. Yes, I speak figuratively, but what if such flaming manifestations could be a reality. Imagine, living in a world full of wonder, a fantasy world with flames bursting from ears, licking beneath flesh, destroying all in its wake (wilfully or by accident’s design). If you can imagine such, then your mind is comparable with Sabrina Flynn, the author of A Thread in the Tangle.

The above description does no justice to this book, but instead (like a raging fire) is a spark to catch the dry wood in imagination’s realm, drawing in the reader before consuming them completely. A Thread in the Tangle implements a similar technique, drawing in the reader with beautifully crafted prose and life philosophising from the first line. I can say it no better than the author herself.

Time is fickle, ever chang­ing and flow­ing, ebbing like the sea.  A vast ocean of mo­ments brush­ing against the next, rip­pling be­neath wa­ters both turgid and calm.  It slips be­tween our fin­gers when we wish to hold it, yet moves with slug­gish stub­born­ness when we seek to flee it, rid­ing upon our shoul­ders like an op­pres­sive yoke.  Time is a bur­den we can­not es­cape.  Our lives are swal­lowed in the cold, dark wa­ters of its un­fath­omable depths; never to be re­mem­bered or re­called, fad­ing like a whis­per that never was.  On oc­ca­sion—a very rare oc­ca­sion—one mo­ment will brush against the next and a spark will flare to life that re­fuses to be ex­tin­guished. This is the mo­ment, the spark, and this is how the end be­gins for a shat­tered realm—with a small nymphling who was cold.

This prologue drew me into a story full of emotional turmoil, political intrigue, love, loss, and all that is in between. The characters are wonderfully crafted so that, by the time this story’s fire is raging, the reader can see all shades of blues and reds amidst the orange flames. The banter between said characters is delicious. It adds a fresh element of humour to some of the longer scenes that would be, otherwise, dry. This keeps the pacing up during character development.

Most of the story is told from select points of view. Shifting between these, speckled with a touch of intrigue, works great for building suspense. Some of the concepts have just enough explanation to make them believable, then are left to linger, keeping the reader invested, turning pages faster before the flames catch hold — the story dying in such wake.

Despite all of the glory seen in this flame, sometimes fire can be destructive, leaving nothing but charcoal and death behind. The story is mostly believable and manageable, but in a few places it rages out of control, getting lost in it’s own beauty without realizing there is a story to tell. Behind all the character magic and descriptive excellence, the plot stands still, like logs waiting to be lit. Once the plot starts, it progresses nicely, but lighting this flame earlier would have enhanced this book immensely.

Once fires rage too high, they begin to lose some beauty. This is the case with some longer, drawn-out descriptions of the world’s history and concept explanations through dialogue. These are brief and easily forgettable, but bring the book to a screeching halt like a water barrel to snuff out flames. These wet logs, then, take some time to get started again, creating pacing issues.

Despite some too-extensive, dry world development and a plot coming too long over-due, A Thread in the Tangle is enjoyable. The philosophising through prose is wonderful, and the characters are well developed. If you enjoy fantasy with flame-eared nymphs tangled in the treads of time, this book is for you.