Thieves and Kings by Tommy Clark 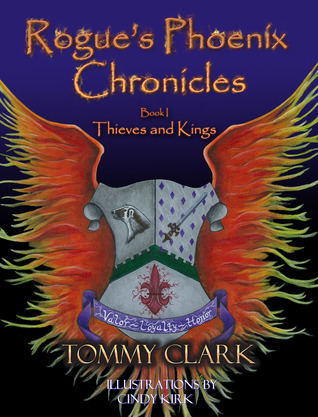 Thieves and Kings by Tommy Clark is the first book of the Rogue’s Phoenix series. It is the story of squires desiring for knighthood, the gods and how they relate to their created world, people and how they relate to each other, robbery, kidnap, political games, rogue factions battling for power: in short, it is about thieves and kings (oh, and also, there is a dragon. It is a fantasy book after all). With such a complex plot and world built, filled with all the goodies that fantasy readers have come to love, what is there not to love? First, let me share with you what is to love, and we will go from there.

The first thing I must say is this: Thieves and Kings will grow on you. I was not blown away by the beginning, but as the reader gets to know the world, characters, and plot, eyes travel faster than pages can turn, morphing reader into a book zombie shambling for the next chapter (or maybe just for lack of sleep). The plot is wonderfully paced, rises and falls flowing seamlessly throughout to bring the story from its humble beginnings to an epic conclusion.

From beginning to end, the reader is treated to a story from multiple different perspectives. Instead of breaking up the flow, such point-of-view changes are speckled in wonderfully to introduce characters, concepts, build suspense, and generally round out the book as a whole. They are often related closely, and scenes are kept short enough to allow for a continuously succinct flow. Instead of getting lost in a messy soup of characters, the reader is afforded the sweet luxury of seeing this tale unfold from different angles like multiple cameras for stylistic, panoramic excellence.

Tommy Clark has a philosophical mind (or so I imagine based on his writing) and it bleeds from the pages. The world building is not just thrown out there for reader enjoyment, but meticulously mulled over to add a holistic feel. There are brief scenes where this magic comes through, and I would have loved to see more of what hides behind the curtains in this world called Rogue’s Phoenix, but… there are more books to come.

The ending blew me away. I was ready to rate Thieves and Kings as a three star wonder until the epilogue rolled out. It is almost a mini-tale of its own, going back to describe much that was left hanging in suspense. This side-quest epilogue really brings the world to life and even adds some great plot teasers for future books, while still wrapping things up beautifully. In short, it was a very satisfying ending, leaving the reader thinking about how everything fits together even after the last word is read. A story that sticks with the reader because of the well thought-out and implemented conclusion is, indeed, one worth time and money.

This book did a lot of things right, but sadly, it didn’t get everything perfect. Though I loved how the world develops, a few things were left far too open ended and “assumed” for my liking. Because of this, a magic system is introduced seemingly out of nowhere. I excused the brief mention of a dwarf having clairvoyance as a one-off fantasy gaming carry-over, until fireballs start getting thrown around, super speed manifests, and all in the middle of a fight scene. It seemed that, all of a sudden, numerous characters (previously introduced) developed magical abilities like they always had them. In truth, such magic always existed, but there was so little (in fact no) mention of them before hand that it messed with my head once it was revealed.

Waving hands at the presence of magic, let’s move on to the action scenes. Most action is close combat, small-time scrapping. Because of the one-on-one sort of focus in battles, Clark chose to go all out with the description. Clearly, this would not work in a larger fight with POVs jumping way too much, but it doesn’t really work in a smaller-scale fight either. Does it matter that much to the reader if a sword hit above or below the knee, and is it that important to mention that is was indeed the left appendage being assaulted? The biggest problem with this is not gratuitous description, but it messes with the pacing. Slower scenes have a right to feel slower, and in fact are better when they do, but faster scenes should, conversely, feel fast. Short, to-the-point sword jabs breathe life into an action scene, a life that, sadly, much of Clark’s action lacks. The odd scene is well done, but for the most part, the action feels more like a spectator’s sport than the blood-rushing adrenaline fest it should be.

I mentioned that the plot is well done and the POV changes are wonderfully implemented, but this does not mean that the beginning of Thieves and Kings doesn’t feels a bit scattered and unfocused. Because of the short scene changes, this can be mostly excused, but it is a minor point against the book, thus deserves mention here.

Thieves and Kings is a wonderful fantasy tale filled with the highs and low of life, political upheaval, and battle with men and gods alike. It has an extended “epic” feel to it without getting weighed down, and captures reader attention throughout. Save for a shaky beginning and some pacing issues with the action, this book is a wonderful trip into the potential of indie fantasy. If you love fantasy, you will love this book (especially if you stick it out until the end. The Epilogue is particularly choice).

While reading Thieves and Kings, I noticed a pattern running throughout. Many of the characters are effected by father/son relationships in different ways. (Such a profound statement, I know!) I had the opportunity to interview Tommy Clark, and asked him the following question about it:

There are some father-son tragedies in “Thieves and Kings” that alter plot and character dynamics, forcing particular characters into situations that they were, perhaps, not prepared for. In reading about your life story, I see that you have experienced a lot of death/sickness in the family over your short 9 years of marriage. Could you talk about personal dynamics between fathers and sons that you feel are integral to effecting how fathers view themselves, and how children are raised?

Now, to introduce the author of Thieves and Kings, Tommy Clark. Enjoy his thoughts and reply to my question. It is quite informative, and really brings to light a lot of the relationship implementations in his writing: 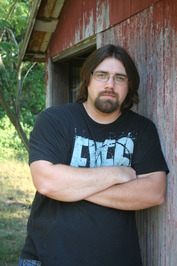 My father was a great man. I was named after him and I could not feel a bigger honor in this world. My dad, known by many as Cowboy, was one of the nicest guys a person could know. He took me fishing a lot and would always invite my friends, many of whom didn’t have their own fathers in the picture. I can remember several occasions where my friends would tell me how much they appreciated my dad and how big of a role he played in their lives. Other friends I had did not get along well with their overbearing fathers and found mine to be a break from their relationships with their own.

My dad played a major role in helping me to grow into myself. He was the sort of guy who would say “I don’t want you to do something stupid, but I don’t want you to regret your choices in life. You’re going to do some things that you will later look back on and know they were stupid. I want you to accept those things. Those decisions will help you grow.”

My dad always seemed to get it – understand what I was going through. He was always willing to listen and offer guidance if needed. I put a lot of stock in him.

When I lost my dad during my first year of marriage, just as I was stepping into this new chapter of my life, I was heartbroken. It has been nearly 10 years now and it still chokes me up to think about that loss.

When I started writing Rogue’s Phoenix, I hadn’t quite noticed the effect my dad had on me or my creativity. As the book came together – and these relationships came together – I noticed all of these differences between characters and their fathers/sons. It doesn’t affect the book on a direct level, but there are elements there that speak to this. Whether it be a king and his son or Kryon (the god) himself, the effects their fathers had on them become evident. For the princes, the effect their fathers have on them seems to have affected their very nature. The development of these relationships unfolds throughout the first book as well as the second.

I tend to write with inspiration from my life. I never really put much thought into it, but looking back I have began to notice a trend. Many of my characters don’t have a father in the picture. I think it’s an easy place to put characters. It’s a great place to start a character. Without this figure in the story it creates a challenge to push these guys to grow. Where there would be a fatherly figure, instead, we have the buddy who seems to always have some insight.

I lost my father in June of 2005 and found out I was going to have a son in January 2006. After the initial fears of being a new dad for the first time, a different type of fear settled in. My son would not get to know his grandpa. I would not have him to lean on for any fatherly advice. My dad raised me with respect and that laid the foundation on how I treat everyone I know. My dad didn’t know an enemy-and I feel the same about myself. I know a lot of people and therefore have a lot of friends. I raise my son, Dylen, as best I can with the same values my dad taught me. I hope to live up to the image I hold of my dad. I think the way a child looks at their father says a lot about how good a man that person is – how compassionate, loving, strong and intelligent.

As Dylen grows up (and now Braelyn, my daughter), I hope to fill the same shoes to him and his friends that my dad did for me and mine. I want to be the guy they come to when they need advice, or when they mess up. I want to be a disciplinarian but with compassion and understanding. I hope that as Dylen and Braelyn grow up, they feel I was a good dad, that I did my best for them. If they can tell their friends that their dad was firm but just and a good man, then I’ve done a good job.