A post-apocalyptic book without zombies! 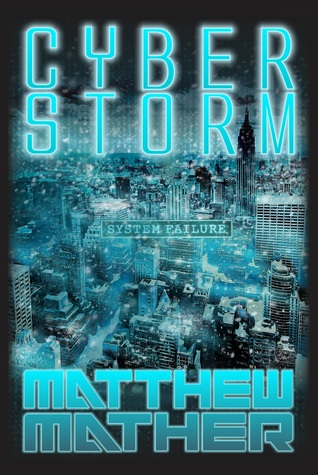 This book had all of the things that make an end-of-world scenario great. #1 the main focus was on the relationships and how the disastrous situations were effecting everyone. As far as I am concerned, this is key. Too often I find that end-of-the-world type of books are a lot about the action, but forget that there are characters behind everything going on.

Mather sets the scene well by introducing families and friends, developing relationships before the the world starts falling apart. As a reader, I got a feel for what was happening inside the character’s heads, and could relate with them the whole way through. They played off of each other’s strong/weak points well, making for a fairly well-rounded cast.

The story moved along at a steady pace. This is not an “action heavy” book, nor is it a slow romp through a world that has fallen apart. CyberStorm follows the lives of key individuals as the world is falling apart, and the reader gets to see how they interact before, during, and after the fact. The day-to-day survival is a big focus, and naturally there are some people working toward this common goal, and others… not so much. The tension of learning how to survive and just get along, while still deciding what (and who) is the most important, is knit together really well. There is just enough tension (relationally) to keep the reader pressing on. This is, by far, the selling feature of CyberStorm.

I was ready to rate this book 4 stars up until the end. It is fairly well-put-together until the post-crisis moments. Mather uses a “24” style of progression, setting up time/day markers instead of chapter headings. This lets the reader know exactly when things are happening, and serve to build tension in a few places. This, however, falls apart at the end where weeks go by and “things happen.” It goes from skipping hours within a day to jumping weeks (and even months) ahead without any real warning. Because of this, much of the “so, why did x happen in the book?” answers fall flat with long drawn-out passive voice descriptions of “this is what happened over the last week/month that we just skipped.” I understand that the author wanted to pick up the pace a bit for the ending, but I feel like it could have been done a lot better.

The only complaint I had for most of the book (taking it from 5 to 4 stars) is that the reader is kept in the dark of what actually is going on as far as the over-arching plot. This is, mostly, made up for by the day-to-day survival that sucks you in, but a better plot over-all would have done wonders for this book. And, as mentioned above, because of the poor over-arching plot, when things finally do come together, it almost feels silly to keep reading. Because the book is mostly about the relationship struggles and the drama of just trying to survive (lacking any real bigger picture moments) once all of this is taken away, the pages pass by dryly.

I enjoyed this book quite a bit. It held my attention with the suspenseful dire-straights living scenarios and relationship issues caused by the end-of-the-world writing environment. It is a pleasant treat to see characters that have real feelings and struggle with them as people would in such dystopian situations. Sadly, the bigger picture is patchy at best, and the ending makes this book fall flatter than it should. If you enjoy low sci-fi and dystopian fiction, I highly recommend this book.

Note: This book was originally self published and DRM-free in multiple places, but because of some recent publishing changes (CyberStorm now gone traditionally published) there is no longer anywhere to acquire this book without DRM. My apologies to those wishing to purchase this book DRM, and highest hopes to the author as he continues to flourish in his writing career.