The Dim Realm by Matthew Holgate 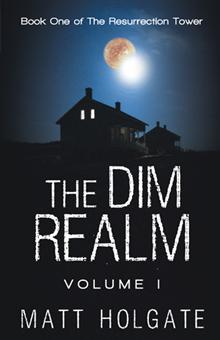 Have you ever woken up with a hang-over so bad that no amount of coffee can help you remember what happened last night? Perhaps, perhaps not, but I am willing to bet (don’t ask me how much) that once the truth of your night is revealed, it is nothing like the truth that Corin Drey discovers after waking up in similar straights. He wakes to find… dead bodies. How did they die, and what is he doing there? Find out in The Dim Realm by Matthew Holgate.

The first thing that struck me was the length of this novel. A long book usually means one of two things: it is amazing, or it is awful. Within the first few pages I could tell that the former would be a more relevant description. The reader is immediately pulled into the scenes unfolding, hearing, seeing, feeling, tasting, smelling the world coming to life around them. The imagery in this book is amazingly flavourful, and the scenes are set beautifully. Holgate has a handle on how to use personification to bring a scene to life.

“Wind moaned in the trees behind him, drawing breath and then sighing. A lonely sound, a whispering voice born not of the ocean but of the land, one that yearned to cry out. It pleaded with the crash of waves and the pleas of gulls to listen, just as it pleaded with the traveller in words he almost knew. Come back to us. There is so much more to do.”

Not only is the description so rich and inviting that the reader can forget where they truly are (and no, this time it’s not because of too much alcohol), but the internal musings of the characters are brilliantly rich and masterfully implemented. The back-story reveals through internal monologue are pleasingly realistic. Just like our minds and memories ramble about, so do they in the heads of the character in The Dim Realm. This adds delightful flavour to the characters that is not often seen.

The different point-of-view characters are wonderfully interwoven with smatterings of what is to come in someone else’s POV section, or reminders of what has happened through clever word choice. Just when the reader is wondering how this new POV section connects to the rest, enough clues are revealed to keep things succinct while remaining interesting and mysterious.

Sadly, every good thing must come to an end. I really wanted to like this book more than I did. It has a lot going for it. Holgate knows how to craft a scene, shape characters, and implement a plot, but it falls flat in many areas.

The Dim Realm has a bad case of “can’t see the forest for the trees.” The trees are beautiful, wonderful, glorious even, but there is so much focus on the trees that the forest becomes a haze. Some scenes are very over-drawn with too much meticulous description of scenery and passive voice to explain the history of the world/characters. Mostly character history was well done, but sometimes it droned on in an unengaging manner, adding length but no meat to a scene.

This plays into the gigantic pacing issues. Most of the book is extremely slow, and it takes 90% of the book until the plot finally gets going. The whole thing felt like a giant introduction. To be fair, this is only Volume I of The Dim Realm, and there is more to come, but after 700 pages, I was hoping the plot would go somewhere.

Many scenes that should realistically be one chapter are split over ten chapters, stopping in the middle to flip to some other POV, and then that scene is cut off to flip back to the first scene that was previously left unfinished. Because of the long chapter lengths, this makes the book feel incredibly disjointed. I kept having to remind myself, “Where is this character again? What are they doing?” because the scene resumed in the middle. It is almost like in the middle of a heart-pumping fight sequence the reader is thrown over to watching some guy take a walk in the park. Such antics make the whole thing feel incredibly unrefined and lacks focus/immersion value.

On the note of action sequences, a lot of them are split so because they drag on forever. They plod along too slow to keep the thrill up because of over-description of every single sword swipe interspersed with giant internal monologue sections which break the flow. This gives much of the book a stop and go feel. The pages are filled with lights coloured yellow and red, but not many greens.

A number of chapters end with poorly implemented foreshadowing that ruins the thrill of what is going to happen. Often, the reader will experience concluding sentences such as: “he would, however, not see them again, because he was about to die,” or “little did they know that the man would never be the same again.” Instead of adding suspense, most of the time, this ruins the coming scene because the reader already knows what is going to happen.

Ultimately, what made this book good is also what made it bad. The flavourful description and internal monologue is excellent – more than excellent, it is downright amazing – but too often poorly implemented, throwing off the book’s pacing. The book is great if you love getting into the heads of characters, being invested in a scene so much that your senses come alive. After reading it, I almost feel like the world described and the characters/culture therein are real. Sadly, the pacing issues in this book diminish it’s enjoyability factor. If you like a great fantasy tale of truly epic proportions, this book is for you.