Eyes in the dark, a watcher in the night… or is it just the wind? 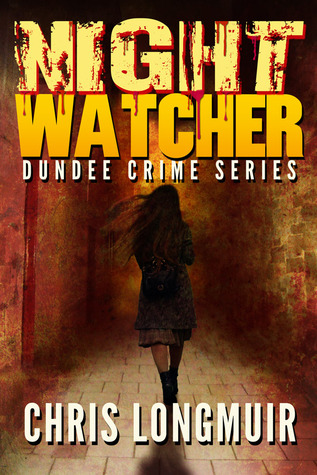 Do you ever feel like you are being watched. Your head whirls around, the shadows creep toward you, your heart beats louder, rising in your chest, but you see no one: no pair of eyes from within that darkened veil of night, no watcher in the shadows. How foolish you feel, how silly, but the paranoia mounts until you reach the comfort of your home. Only then, does the fear subside… mostly. That house of your, that home, that haven of safety still has windows, those panes of glass like two-way eyes in the darkness which cloaks the sky, and your house, in an invisible haze.

If you have ever felt like this, you have felt like Nichole (the protagonist) who is stalked by the Night Watcher… or is it just her imagination?

Night Watcher is a crime mystery. Think, police procedural, but then forget that you ever thought that. Chris Longmuir pulls the reader into the lives of her characters, and there is almost more about the people involved than the mystery itself. The point-of-view jumps around like a happy-go-lucky rabbit, but this is not a bad thing. Often lots of POV changes can leave the reader confused or uninterested, however, Longmuir seems to have a knack for it. By jumping between characters, the reader gets a chance to be inside the head of almost every character involved. This works well because the scenes are short and to the point, keeping things moving so that one character POV is not left hanging for too long. The internal thought processes mixed with a hopping POV give this book a great flow, as well as developing the characters well.

There are just enough back-story-reveals to round out the characters, keeping the reader interested in what is going on. Often with mystery novels, the author holds things back to let the suspense build. Longmuir takes the completely opposite approach. The reader gets to experience the unfolding story though the eyes of victim, police, lover, friend, enemy, villain, and much more. Instead of not knowing what is going on, Longmuir open up the mystery for the reader, while still allowing the villainous moments to be just as thrilling. The “night watcher,” for which the book is named, gets his time in the lime light, but his curious ways are still shrouded in enough mystery to keep things interesting. The night watcher’s POV moments were not over-powering, but delightfully speckled throughout, building suspenseful/dark moments into otherwise dramatic events.

After finishing this book, I am surprised at its length. It gives the reader that poppy teen feeling, which often will translate into a shorter book. Night Watcher is not incredibly long, but it runs over 300 pages. Though it is packed full of characters and plot, there is not a whole lot of writing to go with it. Every now and again, the reader is struck by a wonderfully crafted scene, but for the most part I found the writing a little dry and lacking flavour. The story and characters hold potential, but it is sadly unrealised.

The book moves quickly, but not necessarily because of what is happening. There are brief what-is-going-to-happen-next moments, but mostly it is a story about a bunch of characters living out their lives: going to work, going home, and fighting with their spouse (yes there is lots of drama in this book). Though a fast pace can be good, sometimes I felt like the book moved a little too fast, not letting me stop and breathe in the scene. The pacing is artificially inflated with a lack of words instead of artfully enhanced through flavourful description. Such lack leads to a lack of emotion within the scenes, thus a lack of connection with the characters.

Most scenes lack description of any kind, and the ones that do have description are few and far between. The characters spend most of their time talking to each other, or talking to themselves. Though this is delightful, it lacks scene/emotion building. As a reader, I felt like an innocent bystander, watching events unfold, instead of being drawn into the story.

POV changes to minor characters adds flavour, but the reader isn’t given enough time to actually get to know/care about them. Though the POV changes inform the reader about some of the other characters and the struggles they are having at home/at work, it comes across as unfocused. Many of the POVs were well done, but a number of them added little or nothing and could have been left out entirely, approaching the scenes from a different angle to enhance the flavour.

Night Watcher is wonderful for the reader who likes crime mysteries and lots of drama. It is packed full of characters and the story is wonderfully crafted. It moves at a fast pace, but sadly lacks the emotional punch that draws a reader in. If you enjoy crime mysteries, this book is for you.