A dystopian novel all about the money 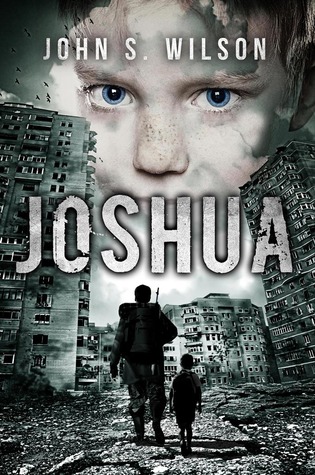 Money… it’s just paper with writing on it! Not many of us stop to think about this. What would happen if suddenly people stopped accepting cash? They would look at your wad of paper and say, “I don’t care what famous person’s face is on there. It’s just paper!” This fear, the de-valuing of cash, may have been more realistic before my time. Today, money is nothing but a figure in the sky, printed on screens, telling you “value” from on-line accounts and ATMs. Despite this fact, imagine with me for a second a world where cash is market central. Without cash, the economy would fall, chaos would ensue, and people would be brought back to their roots; what does it take to survive? If your imagination is as vibrant as that of John S. Wilson, you may have imagined a world similar to that of Joshua.

Joshua is the story of a man and little boy making their way through a dystopian wasteland. The first thing that struck me about this book was how character driven it is. So much time is spent walking alongside “the man” (yes the protagonist is simply identified) that the reader becomes engaged in his life and journeys. From start to finish, the reader will follow this man through the joys and sorrows of what it might be like to live in a post-apocalyptic world.

John S. Wilson does an excellent job at make the destitution in this world he has created seem real. It doesn’t just feel like random looting, killing, and destruction for the sake of it, but instead the world bleeds hopelessness with tangible and heart-felt realism. Not everyone is seeking to make the best out of what they have, or hoarding, or fighting for their survival. Many give in to their inner demons, the reality of life too much to bear. Joshua has a quiet, sorrowful tone to it that I have rarely seen penetrating a book from cover to cover.

John S. Wilson had some great ideas, but the execution was, sadly, quite poor. The first half of the book is a series of flashbacks which attempt to develop the world and the characters therein. Though they work well considering such intentions, they do nothing to further the plot, and, in fact, put it on hold, making the whole book feel disjointed in the same way a jumping POV would.

The jumping back and forth in time makes the book very slow and allows for large sections told exclusively in passive voice thus forcing the reader to take a step back from the action and see it as an outside observer, instead of being fully engaged. With such destitution running rampant, there is plenty of opportunity for this book to bleed with emotion, drawing the reader in with the raw power of helplessness, but unfortunately these opportunities are missed entirely.

So much time is spent with the back-story of why “the man” is where he is, and what happened along the way that once the story gets going, there is hardly enough time for anything to happen before the book is done. It almost feels like the book is split into two sections: what happened before, and what is happening now. I applaud John S. Wilson for attempting this unique narrative style, but sadly he did not pull it off.

John S. Wilson had a great story to tell, but sadly didn’t know how to tell it. The reader spends most of the book feeling like an outcast, the word choice and language almost purposefully pushing them away. If you can get past the poor story telling and dive into the actual story, there is a hopeless world waiting for your discovery. If you like dystopian fiction, this book may be for you.