Get on Board Little Children by Victoria Randall

What if you needed a license to have children? 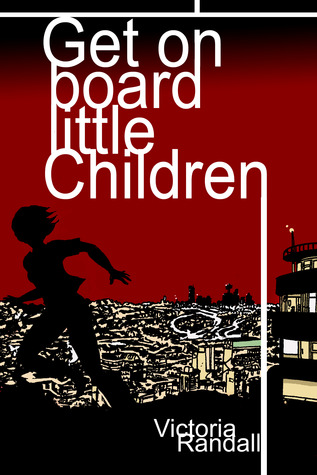 Unwanted children run rampant in the streets. Kids are abused at home. One step at a time – one kid at a time – the world slowly progresses into chaos. This is the state of things in the near past of Get on Board Little Children. The near past that is out present day. Child Protective Services swoop in, hiding behind masks, saying they want to help – to make the world a better place – but broken families are left in their wake. Kids are ripped from the grasp of their parents because the home appears to be a “high risk.” Scold your child in public, take them out with too many holes in their clothes, face unwashed, and watch out! Your lack of money, or perception there of, might leave your home in disarray, and children taken away. This is the near past. What is the next political step? The next “fix” to challenge culturally “unfit” parents? Don’t let them have kids at all.

Victoria Randall has been able to take this politically and culturally relevant scenario to the next level. Get on Board Little Children is set in the near future of our current world, a world where we work toward cultural peace (which really means that everyone has to be the same. The rich and stable rule the world, right?) It is not your standard Science Fiction read, but tackles culturally relevant issues in much the same way. What made me enjoy this book the most was not the writing style, the story, or any of those standard things, but in fact it was this cultural issue that resonated with my heart. It is the story of a woman who is on the run from the government because she doesn’t have enough money for the “I’m-allowed-to-have-a-baby” license, and will not go through with the mandated abortion.

I could write an entire review on the cultural relevance of this particular book, analysing the details to the point where it would make you cry, but alas, that would not be a book review, instead being a political statement. Suffice it to say, the moral issues this book deals with are the selling feature. However, there are other things that I liked about this book. (“Thank goodness! Get off your soap-box already!” “Okay, but only because you asked nicely.”)

The scenery that Randall has penned could be best described as word dressing. This near-future dystopian world lays before you. The plot is in place. The characters are there. But everything is naked like a blank page… until words come to dress this story, one piece of clothing at a time, making this culturally relevant story more culturally appropriate. The reader no longer has to look at a naked story, but is now delightfully informed of the little details that make a scene come alive, while still allowing the story to progress. Everyone can move forward and put clothes on at the same time… right?

The story follows our protagonist, for the most part, keeping things on track and succinct, but there are brief point-of-view switches to the “bad guys” which aid in fleshing out the thrill of the ride. The mostly single POV works well, as it is easy for the reader to follow along. The POV switches to the antagonist(s) are brief and punctuated, increasing the suspense level when things slow down for our protagonist(s). This use of POV changes not only kept the suspense level up, but aided immensely with pacing. The book is primarily fast-paced, but not because it is let’s-run-away-from-big-government-men-with-shotguns all the time. Yes, there are trials. There are struggles, but the thrill stays up because of the dire straits that our run-aways are in. The fast-paced scenes are well integrated and interspersed with slower scenes to allow our characters (and the reader) to re-cooperate.

The book ends on a satisfying note, wrapping up the plot nicely, as well as touching on some of the side character’s stories, giving them enough spot-light to feel closure. The plot is not very complex, but the lack of complexity allows for a quick and satisfying conclusion.

Though I enjoyed what word dressing there was, sometimes scenes were wearing nothing more than underclothing. This, perhaps, gives enough flavour to tell that it’s a person (or a scene… this metaphor has stopped working a long time ago) but not enough to accent their features. I didn’t feel emotionally engaged with the characters, even though they were dealing with some tough issues. This is not simply dialogue slapped on a blank canvas, but it is far from exemplary word/scene crafting.

Some of the side characters had intriguing stories to tell, but were not given enough of a spot-light to be worthwhile. Many of the characters lacked any real development, instead serving a single purpose and remaining the same from beginning to end. Even the main characters who got the most focus throughout were, for the most part, cardboard cut-outs. A few scenes act as shadows of development, but not enough to have any serious impact. This makes it difficult for the reader to relate emotionally with the characters.

More setting would have been nice. Right from the first sentence, the crisis has begun. There was enough world-building throughout to make the crisis believable and set it up, but not enough pre-emptive development to draw the reader in. Through the story, there is a little bit of development, but more before the plot picks up would have enhanced the emotional attachment between reader and characters.

Randall deals with some heavy issues, but because of the fast pacing, it almost makes the ethical questions dealt with feel forced, lacking the beauty of internal turmoil. The “on the run from the law” theme should set the characters, and thus reader, on edge and anxious, but the emotional impact of their situation is mostly missed.

Get on Board Little Children is a thrill ride through a near-future world. It deals with all sorts of ethical questions concerning children in a realistic and believable way. The plot will draw you right in, and keep you entertained, but sadly, the lack of character and scene development leaves the book a little lacking. Nevertheless, it is an enjoyable read that will keep you entertained until the last page.