Journey to Altmortis by Thaddeus White 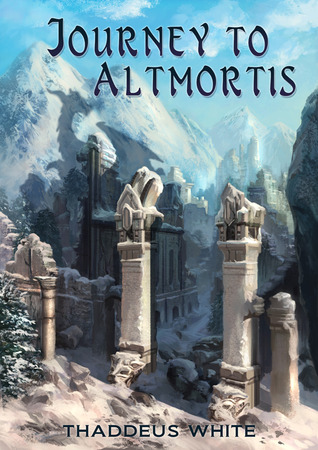 If you are Canadian, like myself, we have just come out the other end of Thanksgiving. If you are American, the holiday will soon be upon you. While I was sitting in ridiculous holiday traffic on the highway, en-route to meet family for too much turkey and pie, my mind wandered into those far reaching spaces were imagination comes alive. I was thinking back to my most recent read, Journey to Altmortis, and considering what to put it my review. Though I was not journeying to Altmortis, I felt it would be appropriate to compare my recent journeys with that of Thaddeus White’s creation.

Okay, so there are little to no similarities between our journeys, but wasn’t this a creative way to start a review? Thaddeus is journeying to Altmortis, a dead city where untold treasure and dangers abound. His goal is to retrieve a family heirloom that may have more than just sentimental value going for it. I was just journeying for some Thanksgiving dinner… but I guess that’s the closest my life gets to a quest of epic fantasy proportions.

The book starts out wonderfully. Right from the first chapter, the characters drew me in, to the point where I knew a plot would develop, but no matter what the characters went through, I could see myself enjoying questing vicariously through the words of Thaddeus White. The characters are well-balances and play off of each other nicely. The banter between them is both hilarious and enlightening as character development is concerned. Here is a short snippet that I find particularly amusing:

“What were you doing last night, mon ami?” Pretty Pierre asked. The Felarian’s nickname was ironic. Flames had devoured his left ear, puckered his left cheek and inflicted twisted scars upon half his skull.

“Killing my sister.” He accepted Pierre’s helping hand and got to his feet. “An unpleasant dream indeed.”

“Your sister, despite being dead, is enjoying dinner downstairs. It is quite late, but she suggested we let you sleep in.”

“And our diminutive friend?” Roger the Goat was notorious for many things, but his skill at picking locks and his short stature had persuaded Thaddeus it would be useful to bring him along. The ruins of Altmortis were likely to offer plenty of small spaces into which the thieving dwarf might squeeze.

Thaddeus grinned. “Making himself at home then.”

As expected, this is a story about a journey. There is not a lot of development before the characters are off on their quest, but as the story progresses, the continual character development and back-story reveals hold the reader’s interest. The characters and their development are, by far, the selling feature of this book.

Not only are the characters well-done, but White has a way of crafting a scene through vivid imagery that makes his writing come alive. I can say it no better than White himself, hence thus I quote:

“The salty spray was deliciously cold on his skin. The chill wind pierced his cloak and turned his skin a bloodless white. Gusts billowed his cloak and rain lashed him, and Amoux Broussard loved every moment of it.”

This is but one of many moments during the long Journey to Altmortis that I felt the need to stop and sigh, or smile at the wonderful crafting of words. I cannot and will not ruin all of these precious moments for you. All of the magic therein can only be experienced by reading this work of art, devouring the words spilling from the mind, heart, and fingers of Thaddeus White.

Point-of-view changes can often be poorly done, but, though White implements many different POVs, none of them felt sloppy. In fact, the POV changes between party members were so seamlessly implemented that the reader hardly notices them at all. With point-of-view changes comes further understanding, flavour, and believability to every character, thus enhancing the relatability of the reader to the characters immensely. The POV bounces around some, but because it mostly stays within the party that the reader has been previously introduced to, nothing ever gets confusing or muddied. Instead the reader gets treated to following this Journey to Altmortis through a variety of character’s eyes.

There is explanation and character reveals throughout, and the book starts off strong, but I would have liked to see more introduction before the journey. There is not a lot of meat before the reader is thrown into the main plot, travelling toward the dead city of Altmortis, without really knowing who is travelling. The introduction to the characters that is there is quite well done, but unfortunately it just touches the tip of the iceberg. I wasn’t really sure why exactly this group was travelling together, what motivated them, what was so important about Altmortis and the family heirloom they were searching for until about half way through the book. More initial development of the characters outside of the main quest would have enhanced the journey, making the reader understand more of what is going on and why, instead of just being thrown right in.

Though the POV changes are internal, making them easier to follow, because of the lack of character introductions, I often found myself confused as to who was who. There are a fair number of characters introduced all at once, and though they all have their own little quirks and reasons for tagging along, this was thrown on the back-burner, almost as if White assumed that his readers would know who the characters are. Bear in mind, that I have not read White’s other book in the same world. The author stated that there is some cross-over, but it is not imperative for one to read Bane of Souls (his first book) before Journey to Altmortis. I can guess (depending on the character cross-over in Bane of Souls) that reading the first book previously to picking up the Journey might nullify this complaint, but take such surmising for what they are (opinion without any knowledge of potential rectification). Suffice it to say, as a stand-alone book, the character introduction leave much to be desired, leaving the reader confused at times and uninterested at others because of this fault.

White uses a lot of passive voice, and it seems to be his writing style. It blends fairly well with the more active sections, but fleshing out these scenes instead of just stating the facts and pressing on would have increased the enjoyability of this book as a whole. I found the ending, in particular, to be very fast-tracked with rampant use of passive voice. It was almost as if the whole book was about the Journey to Altmortis (go figure 😉 ) but the return journey was so unimportant that it was barely mentioned.

Journey to Altmortis will take readers on a journey through the mind and words of Thaddeus White. Along the way, the reader is exposed to humorous characters, witty banter, and some sections of beautiful prose that make the world more alive. Clever use of point-of-view makes the characters the reader travels with more well-rounded, though the initial introduction of them may lack some meat. If you are a fan of epic fantasy and journeying through a strange and magical land, this book is for you.