Rise of the Aligerai by Kira R. Tregoning 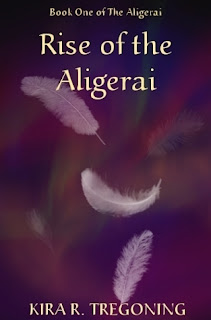 Would you rather have wings or hold destructive magic at the tips of your fingers? In Rise of the Aligerai you can do both! The first in an urban fantasy trilogy (I presume. Kira R. Tregoning shows that she is editing the second book as well as writing the third… so at least a trilogy anyway.)

This is a story of parallel realities… but not really. It’s a story about some college girls just trying to find their place in the world… but not really. Well, what does the description say? “Sita Newbury and her college roommates must protect both Earth and Corá from soul-stealing occultists or face the destruction of both worlds.” I guess that’s the best we’re gonna do.

If you have read this plot synonsis, you have read the book. Don’t get me wrong this is very lengthy book (164,000), especially for the price tag (free)… but is it a good book? I put that book at the top of my to-read list because I haven’t seen any hype at all about it, and thought it deserved at least one person to read it and say what they think. I guess I am that one person.

Tregoning gives a thank you in the forward of this book for all those who helped her via beta-reading, editing, or just general encouragement. The editing quality of this book really shines, as I don’t think that I found any poor grammar or spelling (not that I was reading with the criticizing eye of an editor, so there might be a few poorly placed commas or something). For such a lengthy book this must have taken a lot of time and I applaud Tregoning for doing this. There is nothing worse than struggling through poor editing to try to find the gem underneath. With the poor spelling/grammar out of the way, the read is free to find the gem… but there is no gem here.

Tregoning has a great idea for a great story, but that’s where the greatness ends. There is such great potential in this story for mystery and suspense, but the writing style throws that out the windows. It is told from a third person omniscient perspective to the point that the reader becomes very omniscient. There were a few parts in the story where the potential of a plot point or character drew me in, but soon enough the mystery was revealed to the reader in very plain words… and usually more than once.

For example (Minor Spoilers): At the beginning Sita Newbury is attacked. She then goes to college afterwards like nothing happens and the reader is left wondering what that was all about. Once arriving there they meet some guys (because who wouldn’t as a girl at college). The story switches perspectives to one of the guys (the attacker from the beginning) who avoids eye contact with Sita as to not be recognized. Nice hint, but not obvious. Then we switch back to Sita who thinks, I recognize that guy, but where from? not bad, but making it a little more obvious. At this point the reader knows that this guy is the attacker so the writing can go one of two ways A) reveal them to be who the reader thinks they are B) throw in a twist and be like, “actually, just kidding! You were wrong!” Tregoning chooses the former, but in a really bad way.
“That guy is bad news! He works for the enemy.”
“I knew I recognized him! He attacked me house.”
“That’s right, that was him.”
“What? He attacked your house?”
“Yes.”
“Yes.”
–Scene–
“You know, she remembers you attacking her house.”
“Well I did, so good on her for having a memory.”
–Scene– The next morning
“I can’t believe he would attack your house!”
“Well, he did.”

This is a glaring fault of this book that rears its ugly head time and time again. The reader is not left with any suspense at all. Though sometimes the characters may not know what is going on, the reader does, so it makes it less interesting when they find out, making the story predictable. One of the main drives of a good plot that keeps you reading is wanting to know what happens next. If you already know what happens next, why are you reading?

The second problem with this book is coupled with the first in that again I think it stems from the writing style. Everything is explained vs. shown. If the reader and characters need to know about a concept, there will be a dialogue section explaining it in great detail leaving a dry taste in your mouth. After the explanation nothing more need to be said because the other characters make sure to ask all the obvious questions along the way and clarify multiple times just to be sure that the reader gets it. Often-times concepts are explained more than once by different characters in different situations.

And the third problem? This book has basically one character… But wait? doesn’t the book description say “Sita Newbury and her college roommates?” Sure it does, but there are all one character. There are 5 girls who are part of this Aligerai, but they are all the same. All of them are the happy go lucky pre-teen squealing-at-everything-in-site-because-I-can person. Despite the fact that I find these people annoying in real life thus have no desire to encounter them in a fictitious world, I saw no reason to have five of them. The story would have worked just as well with just Sita Newbury at college. When they are all in a room together talking, it really doesn’t matter which one of them says what because they all will pretty much say the same thing in every situation. For the first third of the book I didn’t even remember their names because they were always together and talking, so it was basically irrelevant.

The Conclusion:
With all of these problems, why then did I give it 2 stars? Well, I thought about it for a bit, but I don’t think that it deserves one star simply out of respect for all of the work the author put into this. If someone sat day at their favourite text editor one evening, wrote until their fingers bled, opened paint and scribbled or a while for cover-art, and then posted the book… that is a one star review. This book is well editing, the plot is well thought out, it had some neat (though not new) concepts when it comes to magic and for this it deserves 2 stars.