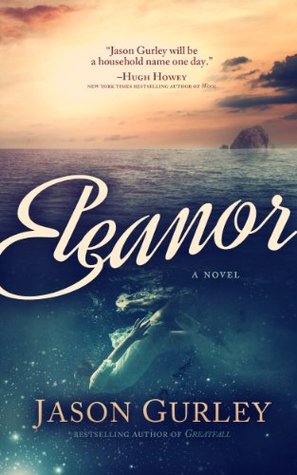 A tragic tale of one girl, one mother, one father–one family–who loses everything: their sister, daughter, and the only thread holding life together. Eleanor desperately tries to keep her family from falling apart while dealing with her own grief in short snippets. Her world slowly drowns, waves of time passing, taking her sister further out to sea… but not forgotten. Eleanor is lost and time is out of her hands until she learns that time is a river, it flows in a circle, and she knows how to swim.

First, it should be noted that anyone with a heart greater than a lump of coal might cry during the beginning of this book. Jason Gurley sets up Eleanor with her sister, mother, father, as this wonderfully happy family. It is such a delight to read their interactions and see the two little girls bantering back and forth like siblings will. The characterization is beautifully executed so that the reader smiles at the cute little girls, feels the nagging pain of a mother’s headache, and the longing of a father who is away from home. Why, then, would non-coal-lump-hearts cry? Because this is just the beginning. The book synopsis leaves no room for questions. Eleanor’s sister dies.

The set-up really makes the reader care about Eleanor as a character and able to feel and relate with her. The book is extremely depressing as any book should be about a girl who’s world is slowly falling apart. Gurley pumps emotions into the scenes so tangibly that they almost jump off the page and drag your heart into Eleanor’s world.

This book, however, has much more to offer than depression (thank goodness). Gurley shifts point of view adding much suspense to each encounter and heightening the emotional impact. This also gives the pacing a unique flavour as some of the POVs are in this strange “other” world that Eleanor finds herself slipping into. What is happening, where is this strange world, and who is in control?

This mysterious “other world” feeling lasts right up to the very end. There is little explanation until everything comes to a head in the final pages. Some things are still not fully explained, but this just adds to the fantastical nature of the tale. Does everything have to be understood perfectly in a fantasy world?

There is not much bad to say about this book. The only complaint I had was with a single scene that takes place far in the future of most of the book adding some pacing issues. Because of the amount of time that was skipped over, certain elements had to be explained using tell instead of show. Because of the emotionally wrenching potential that this skipped over scene could have had, I felt a little bit cheated as a reader (especially because Gurley is so good at pulling my heart out and slapping it around the page until it has nothing left to feel). This one scene, however, is short lived and does not detract greatly from the book over-all.

I don’t suppose there is any better way of putting it: buy this book! I remember a number of times while reading where I had to stop, wipe an eye, shake it off, and verbally declare, “Jason Gurley, you are a god.” If you like an emotionally packed tale filled with mystery, suspense, drama, and fantasy this book is for you. If you don’t… then your heart must be a giant lump of coal.