The Man Who Ended The World by Jason Gurley

All he wanted was to be alone… 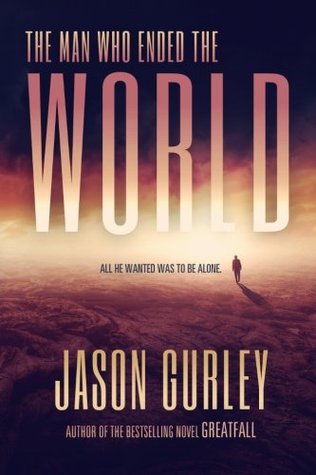 Dystopian fiction is exploding in today’s culture. Everywhere you turn, there is some new end-of-the-world piece of media, ready to be consumed. What would happen if it came true? What would you do if the world ended, and you were one the survivors? More importantly, what would you do if you knew the man who was going to end the world?

The Man Who Ended The World is the first thing I have ever read by Jason Gurley, and I must say, that it was a treat. The story is told from two different perspective — the man who ended the world and a young boy who finds out about him. These two select POVs add flavourful suspense as two lives work toward each other. The POV split between this little boy and the man adds different layers to the sociological reveals as they mirror each other wonderfully with the book’s progression. As the plot progresses, the chapter endings and POV switches are particularly punctuating, adding suspense by leaving the reader hanging, but informing about what is to come.

The book opens with a young boy tailing the man who will end the world. This early reveal of him is a great suspense builder as well. It keeps the reader guessing what will happen next, already knowing where the story will end up, but not how it gets there. Watching the man progress from a lonely bachelor, who just wants solitude, to a crazy psychopath killer is a wonderful psychological trip. His character is wonderfully developed, and the progression is believably sadistic.

A number of times, the story jumps backward in a “memory” scene. This adds incredible flavour to the character(s) while keeping the pacing up and functioning as a world building mechanism.

When the “computer” becomes a character, you know that the book is going to be a classic science fiction treat. Witnessing the human-AI interaction is a wonderful comedic treat, adding humour to this dire-straights end-of-the-world plot.

From beginning to end, the book is wonderful. Jason Gurley has a handle on character and plot development that leaves many other books swimming in a post apocalyptic wasteland while Gurley hides out, safely underground, imagining worlds and breathing life back into the death above. If you like well-rounded characters, science fiction, comedy, and dystopian art with a touch of psychological thrills, this book is for you.