There be demons in and out of mind… 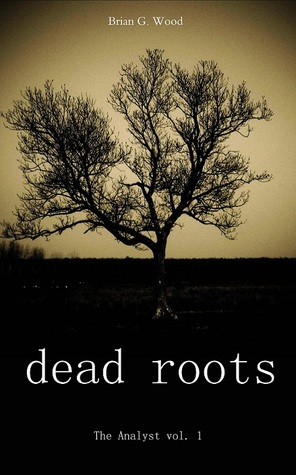 What if demons didn’t lurk in the corners, filling our nightmares with images of terror, but instead walked among us. What if they walked in our skin? If you could see these demons for what they really are, the nightmares of your childhood becoming reality, what choice would you make? Fight, or flee? Thomas Bell chose the former.

Dead Roots is the story of a man haunted by dreams, images from his past bleeding into his present nightmares. Instead of running from his own demons, he faces the real ones on the supernatural plane, protecting society, covering up any trace of their presence. At least, that’s his job. To Thomas Bell, they are indeed real.

Brian Geoffrey Wood drops the reader into the action right from the opening scene. The words turn to phrases, then to paragraphs, then to pages, and before the reader is aware they are sucked into the world of Dead Roots. Wood has a wonderful ability to weave culturally important elements into the action and dialogue, letting the reader grow in knowledge as the story he is telling flourishes. No passive voice or extensive amounts of dialogue are needed to “inform the reader” about how the world works. Wood has designed characters that talk to each other as regular people would, in a culture all of their own.

Thomas Bell hunts demons by day, while facing his own at night. Instead of being grazed over, his dreams come to life, popping with realism, his psychological turmoil growing into monstrous word-crafted demons in the reader’s head. His nightmares are filled with imagery, setting the scenes with an explosive flavour of delight, like biting into a juicy fruit (or perhaps a rotten fruit. His dream are nightmares, after all…).

Wood uses some quick point of view changes throughout, jumping around the action to keep things moving. Instead of leaving the reader in confusion, or slogging through over-description during intense action, this stylistic choice keeps the pacing up. It also adds suspense. There is nothing like having one character black-out after being punched, or loosing consciousness as they fall into a lake, to get the heart racing like a runaway train.

Some of the scenes end just to jump days later to a place and time unknown to the reader. This, in short, leaves the reader scratching their head, wondering how the story got from the last scene to the next, and questioning what happened in between. One particularly drastic jump in the middle makes the book seem like a new plot has been introduced – the old plot being left on the sidelines. The missing “connecting” scenes make it feel a bit disjointed.

There are small portions of over-description when dealing with the magic system. Instead of showing how it works, Wood opts for describing it. Mostly, this does not get in the way of the book’s feel as a whole, but takes away from some of the magic (no pun intended).

Dead Roots is a decent book and is, for sure, worth your time. Despite a few pacing issues, Wood delivers a gloriously dark tale of horror from the mind of a psychologically tortured soul while he fights other truly tortured souls. If you do not have a stomach for gross images, or are put off by sexual content and lots of profanity, you should give this book a pass. However, if you like to read about the darkness that lives inside and outside of us all, this book is for you.