Streets of Payne by Jeff Brackett

A sci-fi mystery filled with Payne

The Rating: ★★★★★
Mature-content Rating: (PG for coarse language and violence) 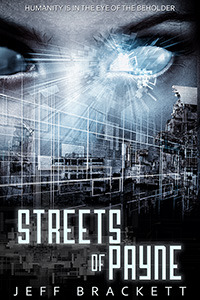 Eyes: those things we take for granted. Everything around us is processed and managed by them, but we don’t often think about how much work they actually do for us. What would you do without your eyes? If you ask Amber Payne this question, she would say, “just get cybernetic implants, of course.” Amber does not live in a world like our. The Streets of Payne are full of cybernetically enhanced cops and criminals alike.

In the opening pages of Streets of Payne, we find Amber getting ready for work, when all of a sudden, her and the reader are thrown right into the action. There is just enough scene setting to get a feel for what is going on before adrenaline is pushed into the pages. Jeff Brackett uses the action to further develop the world that Payne lives in and explain some of a the cybernetic tech while engaging the reader in the story. The engagement continues as Amber Payne faces difficulties throughout the book, the action scenes keeps the pages flying by.

I found that the pacing was quite well done. There is enough down-time between the action of being in the line of duty that both Amber Payne and the reader get a breather. While the plot develops, new characters (good and bad) are introduced and the world the reader gets thrown into is more fully explored.

Jeff Brackett includes a lot of cyberspace interaction in Streets of Payne. Amber Payne’s partner (Kevin Glass) is an “elite cyber-surfer.” This doesn’t simply mean that he is good with computers and that is that. Jeff Brackett lets the reader “jack in” to cyberspace from the perspective of Kevin Glass, opening the doors to a whole new reality that effects the physical word in real and tangible ways. Cyberspace is so involved that it comes into play in everything from simple data recovery to actively effecting the outcome of a fight.

I absolutely loved how cyberspace effected the world. This, to me, was the best and most intriguing part of the book. However, there is still a dirty cloud beneath that silver lining. Cyberspace integration adds some magic to a lot of the action sequences, sometimes to their detriment. Some of the fights scenes are portrayed from Amber Payne’s physical reality, yet at the same time from the perspective of Kevin Glass while he sifts through cyberspace. Though there was magic in this, it often took away from the fast-pacing which is desired in action scenes. It took a lot longer to get from one end of the fight to the next because of the strange POV changes, trying to show the same encounter from two different perspectives at the same time.

The Streets of Payne are not all roses. Some pretty awful things happen along the way, and I really wanted to feel bad for Amber and Kevin, but found no motivation to do so. Based on the book blurb I expected there to be a lot more character development. “Cybernetic implants replaced the organics she lost in the line of duty, and their appearance often causes Amber to doubt her self-worth.” This single sentence in the blurb tells the reader just as much about Amber’s internal self-worth struggles as the whole book does. Yes, she has struggles, but I never felt them. The struggles were mentioned, and there is even some clever use of dreams in an attempt to build back-story, but there was not enough development to make it believable and valuable. This, by far, was the biggest downfall in Streets of Payne.

Streets of Payne was not a bad book, but I wouldn’t say it was good either. It is worth a read, to be sure, but nothing stood out as spectacular. It was, in a word, average. A lack of well crafted prose, developed characters, and a few disorienting POV problems leave this book in the middle of the road. The plot was good, and it had excellent concepts and tech implementation, but there isn’t much else going for it. If you like action with a touch of mystery, this book is for you.