A story about wand, maker’s, and the debates thereof. 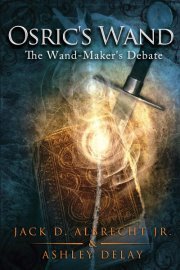 “I just want to be a dude.” Osric says.
“Oh, but you can’t!  That would make a boring story!”  Boom!  The earth shook and things exploded.
“Oh noes!  I am trapped under a pile of rubble!”
“Not today!” Buzz Lightyear comes swooping in and blasts away the rock.
“Fine!” Osric pouts.  “If you’re going to be like that, I guess I will save the world!” And he flies away on a dragon.

Note: This is not a true representation of the book in anyway.  Some characters and event are loosely based off of Osric’s Wand but are heavily screwed for comedic effect.  Also, Buzz Lightyear is a purely fictitious addition on the part of this editor

What did this book not do well?  We will get to that, but first… the good.

Teh Good (yes I wrote “teh” on purpose):
I was drawn into this book right from the start.  A mystery is afoot and though not a lot happens at first, the author draws you in by describing the world and the character’s thereof.  Now, this is not the type of dry description you would see as a caption on a painting, but the description of the painting itself.  A picture is worth 1,000 words, and though the author does not use that many (though I never counted them, so if there is a 1,000 word description, don’t hold it against me) the world feels full of life.  This is what made me fall in love with the book right from the start, because the writing within me surges with passion and is humbled in respect of an author who can describe something so vividly that I am pulled into the world to a point where I don’t want to leave.

If the description is what sold me, the dialogue is what kept me reading.  I have seen (and written, sadly) enough slap-stick dialogue to notice good writing in between the “”s when I see it.  The author uses humour fabulously as the characters foil off of each other that will keep you engaged and interested in what they have to say.  A number of times I caught myself laughing without realizing it and my wife had to ask me what was so funny.  If a work of art gets me laughing or crying (or illicits any other strong emotion, I guess) I give it two +s, or thumbs up.  Whichever you prefer.

I enjoyed the author’s use of the third-person omniscient POV.  It have seen this done very poorly in the past, and this was a beautiful refresher.  Though it was told from such a perspective, I still felt like I was engaged in the story-telling, and not reading as if engaged in an out-of-body experience.

Teh Bad (no, that was not a typo):
“Why is there any bad, Daniel?  If you gave this book 5 stars, shouldn’t it be perfect?”
While this is a good question, I also have a good answer (well, at least I think it’s good).  I have never before rated a book 5 stars because of this very question.  The problem is that I can be cynical enough that there is always room for improvement.  Unless I would rather read the book through in its entirety than eat, work, and any other business that is required of my body, I don’t know if it truly deserves a 5 star review.  That being said, I was torn for a while in deciding whether to rate this 4 or 5 stars.

Now for my reasoning (finally, I know.  Get to the point already, eh?)  It is better than most books that I have rated 4 stars. (Yes, all that build up for such a simple reason.)  Though it has some faults I believe it is an exceptional book.

The first fault it has is probably also what I liked the best about this book.  Sometimes the descriptions and world-building elements can be lengthy enough that it breaks up the action quite a bit.  This happens less and less as the story progresses, but this is probably due to the fact that more “action” is happening.  This bring me to my second problem with this book.  Not a lot happens.  Yes there is some action and fighting and stuffs, but that doesn’t make it an action driven tale.  The backbone of this story is not the story itself but the world-building.  The plot doesn’t jump all over the place, but it isn’t as it seems.  The story starts out telling you it will be about a guy trying to prevent a war, and then its about some mysterious wand… but that’s not actually the plot of the book.  A lot of this is set up (I presume) for the second book, but the plot is actually about dragons (say no more to prevent spoilers).  The reader only finds out about the plot about halfway through the book, and the action doesn’t pick up until the final quarter.

This plot/action issue has its good and bad points.  I was not initially impressed by the “I’m going to save the world” plot and was almost happy to see that, in the end, that is not what this book was about.  I also though, given the length of the book, that this plot would have to be rushed in order to get through it by the end.  Because of this it is almost better that the plot is not as it first appears, but instead there is a single conflict that is resolved nicely by the end.

Conclusion:
This book is beautifully written and despite the minor plot disruptions, it is one of my favourites.  It is full of colourful description, humorous dialogue, and some great concepts when dealing with magic and its various elements.  Oh, also talking animals.  That’s a thing.